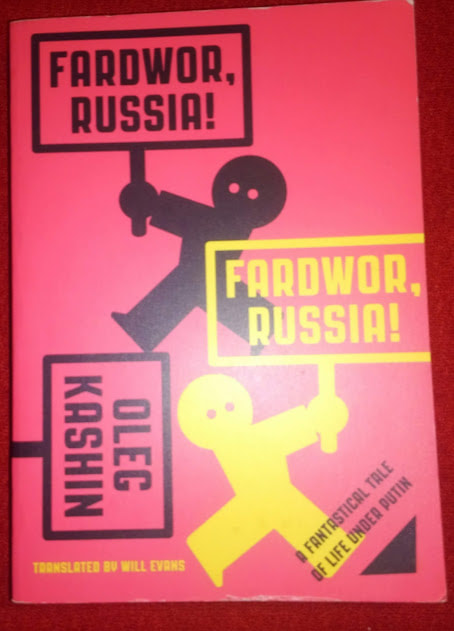 Fardwor, Russia!: A Fantastical Tale of Life Under Putin by Oleg Kashin (Used)

from Goodreads: "When a scientist experimenting on humans in a sanatorium near Moscow gives a growth serum to a dwarf oil mogul, the newly heightened businessman runs off with the experimenter's wife, and a series of mysterious deaths and crimes commences. Fantastical and wonderfully strange, this political parable has an uncanny resonance with today's Russia under Putin.

Oleg Kashin is a famous Russian journalist and activist who, in 2010, was beaten to within an inch of his life by unknown assailants, in an attack most likely politically motivated by his reporting. The events of Fardwor, Russia! (the title is taken from a flag with a slogan—"Forward, Russia!"—gone wrong) could seem grotesque, if they did not so eerily echo the absurd state of affairs in modern Russia. Under Putin's regime, authors dare to criticize the state of affairs and affairs of the state only through veiled satire&—and even then, as Kashin's experience shows, the threat of repercussions is real.

A witty, playful, brave, and incisive work that blends science fiction with political satire, Fardwor, Russia! is a must-read for anyone interested in contemporary Russia&—or the hilarious and frightening follies of power.  "