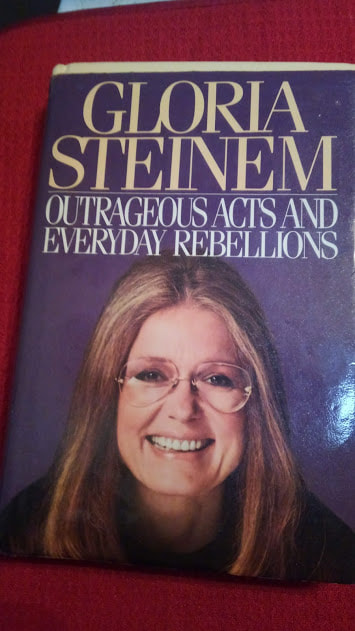 Content Warning some sketchy views on trans people and very anti-porn. If you skip those there are a few gems- like the tearjerker addition "Ruth's Song" about Steinem's mother, underneath the poop.

from Goodreads: "Outrageous Acts and Everyday Rebellions—a phenomenal success that sold nearly half a million copies since its original publication in 1983—is Gloria Steinem's most diverse and timeless collection of essays. Both male and female readers have acclaimed it as a witty, warm, and life-changing view of the world—"as if women mattered." Steinem's truly personal writing is here, from the humorous exposé "I Was a Playboy Bunny" to the moving tribute to her mother "Ruth's Song (Because She Could Not Sing It)" to prescient essays on female genital mutilation and the difference between erotica and pornography. The satirical and hilarious "If Men Could Menstruate" alone is worth the price of admission. "